Poets Must Be Vigilant 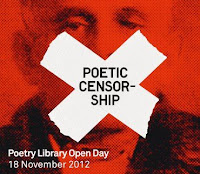 
Given the current debate over issues of self-expression amplified by the increasingly febrile atmosphere surrounding the Leveson press standards inquiry and talk of reforming The Public Order Act – legislation widely seen as encouraging a ‘creeping culture of censoriousness’ – this open day was a timely event.

Poetic Censorship highlighted a history of literary controversies arranged in chronological order with AV facilities included for the particularly adventurous visitor. Preceded by a display of New Acquisitions and a some Staff Picks, the exhibition, in St Paul’s Pavilion on Level 6 of the Royal Festival Hall, Southbank Centre, was organised into a further twelve sections. These ranged from the Imagists and Futurists to the New Narrative movement via exhibits illustrating Children’s Protests and Self-Censorship. Precise textual notes giving background information and generally useful facts accompanied each display.

The central display was devoted to English PEN; an organisation promoting the principle that Freedom of Expression, ‘the freedom to write and the freedom to read’, is a universal right. Here were displayed copies of the recent publication Catechism: Poems for Pussy Riot an international poetry collection (edited by Mark Burnhope, Sarah Crewe and Sophie Mayer) published to rally support in the run up to the appeal hearing of October 2012. There were also flyers drawing attention the Syrian poet and blogger Tal Al-Mallouhi who was arrested in 2009 at the age of 19 and is, sadly, still in detention.

These contemporary cases were contextualised by displays showcasing Manifestos, Censored Magazines, the ‘Education For Leisure’ scandal of 2008, examples of children’s protest statements (both these latter under the heading Poetry On The Curriculum) and instances of censored poets who participated in the 2012 Poetry Parnassus. One of the more disturbing sections was devoted to the concept of self-censorship with examples of publications by Rosemary Tonks, Lynette Roberts and J H Prynne who rejected all, or some, of their own work either for moral, religious or aesthetic reasons. This was followed by a display covering Contemporary Polemics, with items by the New War Poets protesting against the conflicts in Iraq and Afghanistan. There was also a section exploring techniques of DIY zine-making under the heading A Piece of A4; do it yourself production and distribution being the only option for controversial writers living in totalitarian states. The final display was devoted to the Henningham Family Press, who have created a special typeface for the piece ‘An Unknown Soldier’; an elegy for the First World War, here shown in various physical formats.

Unusual and historic exhibits included manifestos by Marinetti and Apollinaire, Hugo Ball’s Dada Diary, editions of Blast and the Neoist Manifestos. Books from the library collection included rarely-seen items by Mayakovsky, Bukowski and the Chinese Misty Poets group (lyrical poets whose works ran counter to ethos of the Cultural Revolution) and a further intriguing selection called Poems from Unexpected Political Sources. This display comprised volumes by Enoch Powell, Ho Chi Minh, Chairman Mao, Donald Rumsfeldt (yes, really) and Maze Prison hunger-striker Bobby Sands, among others. The Censored Magazines on display were of particular interest. These included Poetmeat Twelve, The Outsider, Intrepid (ed. Diane Di Prima) and some examples of the broadsheet-poster-flyer Guerrilla from NYC (1968) billed as the ‘Free Newspaper of The Streets’, edited by Allen Van Newkirk who became a founder of the White Panthers. Guerrilla carried inflammatory verses by Black Nationalist LeRoi Jones who was subsequently arrested and imprisoned. Also there was a rare copy of seminal 70s small press mag Curtains (ed. Paul Buck) initially rejected for financial support on the grounds that its contents were ‘too French’. Rejection or censorship, when not driven by fear of overt political subversion often revolves around xenophobia or a phobic horror of sexual content. This latter point illustrated by the inclusion of ‘salacious underground poems’ by W H Auden and the well-known quote from Kathy Acker about the label New Narrative: ‘Why can’t we just call it sex?’

The publicity for Poetic Censorship features a photo of Osip Mandelstam taken by the NKVD after his arrest in 1938. Previously apprehended for his satirical poem ‘Stalin Epigram’, which poked savage humour at the Stalinist terror machine and Stalin himself, Mandelstam wryly noted that ‘Only in Russia is poetry respected, it gets people killed.’ It is intrinsic to the doublethink of censorship that freedom of expression can so easily be defined as ‘counter-revolutionary’. Here, in the UK, writers are lucky, compared to the situation of authors elsewhere, as can be seen by the case of Tal Al-Mallouhi. But this Poetry Library open day exhibition served as a reminder that, in certain circumstances, the idea of destroying poems which contradict the official line can quickly re-surface; a tactic recommended in 2008 by the AQA when it removed Carol Ann Duffy’s poem ‘Education For Leisure’ from the syllabus. Opponents of Section 5 of the Public Order Act, 1986 have warned against the ‘outrage industry’ that has become a depressing fact of public life over the last two decades; poets must be vigilant.