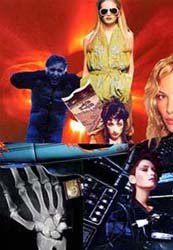 Plutarch’s description of the nightingale (‘A voice and nothing more’) is a salutary reminder of the ephemeral nature of our poetic endeavours. For what are poets – those nightingales of ‘culture’ – but a diversity of voices? Some are shrill, others are gruff, many bombastic, most mawkish, self-important or pseudo-sophisticated, a few, a very few – those crying in the wilderness – strike a chord. Yes, we are all voices and nothing more – with particular emphasis on the word ‘nothing’.
Undeterred by such thoughts, or by the hyper-intellectual theories of academic literateurs living (like several respondents to The Argotist interview and essay) in a state of denial that is really a kind of hubris or confusion or both – a number of new poems have recently slipped out from under my door. Some, thanks to the generosity of several editors, have actually found their way into print and/or online. Last April, under the Dada-style title ‘Bom chucka wah wah’, Stride published six poems from a new sequence, South of Suburbia, an excursion into tabloid impressionism. In June 2008 a group of poems together with two collages by way of illustration (‘Displacement Effects’ and ‘This Is Not The New World Order’) were included on a feature page on the new Inclement site. Aside from South of Suburbia, there are three other new sequences called The Silver Ghost, Radical Chicanery and Perfect Storm.
Various poems have appeared in the SF anthology Old Rossum’s Book of Practical Robots (2008) and Handshake 75, while magazines, Harlequin, Inclement Poetry for the Modern Soul, The Penniless Press, Pulsar and Fire also included a number of items mainly, but not exclusively, from these new sequences. Awen from Atlantean Publishing carried three translations from the French (Breton, Verlaine, Maeterlinck) while ‘Boo Galaxy’, published in Handshake, was even short-listed for the Data Dump Award 09.
Thinking about surfacing?
Illustration: Displacement Effects, 2002
Posted by AC at 14:18 No comments: 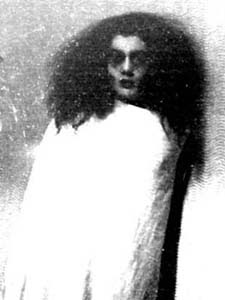 Dancing with the Dead - recently published fiction by A C Evans
Then turning to my love I said,
‘The dead are dancing with the dead,
The dust is whirling with the dust.’
- Oscar Wilde
‘The Vision of Morgan Le Fay’ (1992) was published in Awen 55, December 2008. ‘We Vampires’ (1972) was published in the Halloween anthology Haunting Tales (2008). ‘Mute Witness’ (1972) was published in Monomyth Volume 8.2 Issue 44, December 2008. These are all from Atlantean Publishing (editor D-J Tyrer).
The two short stories from 1972 are from Deathmasques that early collection of thanato-erotic symbolic psychodramas; ‘The Vision of Morgan Le Fay’ exists in various versions and is also included in the collection Colour of Dust (Stride, 1999).
Morgan Le Fay is the Dea Phantastica of all our nightmares. She embodies the anarchy of the wayward imagination. This short prose poem takes the form of a telepathic communication from Morgan, goddess of Strange Doorways, to a visionary ‘scryer’, the Hermetic Philosopher of the Dead Lake (a fictionalised Dr John Dee) revealing her attributes and history to him via his crystal stone.
Beware her ‘shape-shifting gargoyles’ they are everywhere!
Illustration; Dea Phantastica, photo by AC, 1971
Posted by AC at 13:41 No comments:

The View From Planet X

Charting the Postsurreal – Recent Non Fiction by A C Evans

From Hoffmann and German Romanticism, to the modern fantastic in horror films, fantasy has tried to erode the pillars of society by un-doing categorical structures. - Rosemary Jackson (1981)

‘Arcanum Paradoxa’, a brief survey of alchemy and its poetic links which first appeared here on CygnusX, has now been published as an article in The Monomyth Supplement 44 (Jan 2009) from Atlantean Publishing. ‘Arcanum’ is one of several investigative essays – an ongoing enquiry into the aesthetics of the post-surreal. Another contribution to this, no doubt, infinite project is ‘The Unique Zero Manifesto – Towards the Open Realism of Disclosure'’ (2002-2007) which probes further the ‘primal mechanics’ of the creative process. ‘Unique Zero’ is forthcoming from Salt Publishing , included in the anthology Troubles Swapped For Something Fresh, edited by Rupert Loydell of Stride.

Also there are several review articles now available online from Stride.
These include 'Nightmare Scenarios: Incursions of the Unacceptable’ (2007) a look at English horror films through English Gothic: A Century of Horror Cinema (2006) a reference survey by film critic and actor Jonathan Rigby. An abridged version of this review also appeared in the magazine Midnight Street.
‘A Hymn to Contorted Beauty’ (2008), a review of Prague-German writer Paul Leppin’s 1930s novel Blaugast: A Novel of Decline (‘In these pages we find the ultimate, amorphous horror of mere existence depicted in the most graphic way’) and, most recently, ‘Delusions of Cosmic Destiny’, an analysis of Invented Knowledge: False History, Fake Science and Pseudo-religions by historian Ronald H Fritze. Check out a reaction to this review on Planet Clio.

The 2006 'Interview With Jane Marsh', culture correspondent extraordinaire, was reissued in print last year and appeared in Neon Highway 13. Known as ‘The Illustrated Jane’ this contained both artwork and documentary photos chosen to compliment the text.

Artist Mervyn Peake once asked; ‘what should we hope for as the curtain rises and lays bare the gratuitous stage where, unhindered a man may cry his ghostly manifesto? A miracle? Of course. For we have seen paper transformed into a cosmos of such vibrancy as made the room we stood in like a land of the dead.’ (Introduction to The Drawings of Mervyn Peake, 1949).

So... cry your ghostly manifestos!