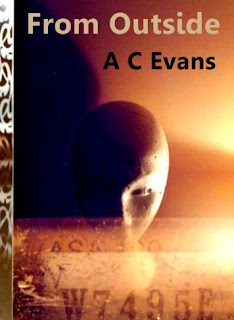 From Outside: a selection of poems from 2006-2011… a few blank stanzas and a handful of quasi open-field ‘verses’ or texts; some quite short, some even longer… a subliminal, tabloid-impressionist, post-surreal, eye-popping 3D parody…a pastiche in cut-up fold-around psychic collage style; hard-edged minimal or sentimental snapshots of cinematic moments on Bling Street, scratched images from films we have never seen. A poetic of the Absurd: the anomalous elements are ‘found phrases’ and chance occurrences. The magic ingredient is peripheral vision. On the upper deck of the last bus home, Des and Shona find that just sometimes poetry can be too much like real life, as when on some far away planet the uniforms from Starfleet Command take all the best tables like its some boogie lounge send-up of Casablanca, set in a glitzy stopping-off place en route to the Boo Galaxy. True enough, you think, thought can be deadly here, and news just in echoes our unconscious desires, our pain and loss, or our nostalgia for unrequited love as Shona murmured ‘forever is a word I hated’. They glide through a shadowy dystopian landscape of misty, crepuscular parks, burnt out buildings, a distant tree-line, empty streets, ancient deserts, ‘zones’, wrought iron, old houses, misty overgrown gardens, vacant rooms, and virtual spaces, where ruins embody the scrambled mind of my caricature madness, where a mirror windows-out onto a dizzy gulf of intimate recollection; of cosmic genesis, of an evaporating universe, of a hyper-cultural eschatology. Today, demons and angels sing from the same hymn sheet. From Outside takes place at ‘the borders of the future’, where a solitary cyborg with metal arms stands sadly waiting for another client; where distracted mannequins communing with ‘emissaries from another dimension’ stare from shattered shop windows. Where the ghost of a slinky jazz singer in a silver dress still haunts a deserted dancehall forever lost in a dream-loop of the Nineteen Forties. Where the Skylon towers over utopian pleasure gardens in 1951, where electronic supergroup Neutrino Subway belts out metal classics in a scene of mirror-ball madness from Miami Vice, and where a cabaret fan dancer dances for herself alone in front of an invisible audience. All those awesome fashionistas! They look just like aliens with big eyes and skinny arms – but this is also a time when the dictator rules through television and flickering screens reveal an alternative world or labyrinth of worlds. The final destination is a non-event horizon: pixels splatter the wall. Here is poetry for the Muses of Aldebaran, and those other disquieting Muses who escaped the Secret Mountain to ‘stalk the world in human form’. From Outside is for the existential outsider ‘the thinker’ who calmly observes the goings-on out here on The Western Fringes, or in the extremely mysterious Selhurst Triangle. The dramatis personae is a cast of mad performers, misfits, hick comediennes, mutants, celebs, ghosts, undercover agents, hot singles and the Eternal Bride from the Large Glass where dust breeds in a cold light. The tutelary deity is pale-faced Hypnos, guardian of desperate poets and ‘you’ (the invisible companion) or, perhaps, ‘you’ (the reader) relaxing on an old park bench, watched over by hunched black birds. Watch your body glow in the dark while dreaming.

From Outside is available as an e-book at The Argotist Online (ed Jeffrey Side)
Posted by AC at 23:28 No comments: