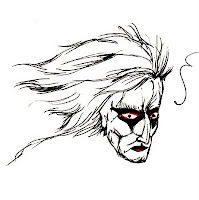 Cultivate the un-sacrosanct: scepticism, cynicism, dissociation – the principium individuationis finally grasped – finally realised – but how? Through estrangement, alienation, dread, despair and loss – it is disillusion we need now, not more illusions – tear away the veil of transcendental perfectionism – refuse to enter the cave, root out the imago dei. Cross the event horizon – find freedom in nihilism; there is no turning back!

I tell you (believe this) – I have explored
Fearfully with my alien mind the limits of art.
I have seen the horizon of fear which none may cross.
But no art is as cold as my heart. 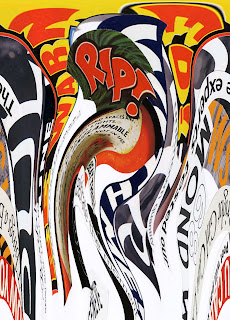 Remember that any art that is not therapy or entertainment is propaganda.

Illustration: The Experts Tested Our Pulsar, 2005
Posted by AC at 20:13 No comments:

When The Lights Go Out

Implicit in the idea of ‘archetypes’ is the possibility of ambivalence, the bipolarity of light and dark – also, there is the possibility of mortality, for archetypal influences can wax and wane or ebb and flow, like tidal forces, like everything in nature. If the world is an imperfect place, then the archetypes are correspondingly imperfect (natural): it is unrealistic to assume, like Plato, when he devised his scheme of ‘ideas’, that the archetypal world is a transcendent sphere of ultimate, supreme perfection. It is necessary to criticise this Platonic delusion, crucial to expose this mystique of ‘perfection’ and purity. But, even in a secular society, there will be a reluctance to deconstruct any proposition of this kind because humanity is so desperate to escape the curse of endurance. Any straw in the wind, any ‘insight’ confirming the universe we know as ‘fallen’, or a pale reflection of a better, happier place beyond suffering and degeneration, becomes more precious than holy writ and believed even more tenaciously.
The shadows on the wall of our cosy, little cave are our own ‘ideas’ – shallow and superficial intellectual speculations, ideological snares and distractions, nothing more – we are the sole occupants. When the cave is blocked by an avalanche, what then? What happens when the lights go out?

The Shadow Of The Uncanny 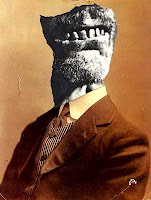 The longest period of human history is human prehistory – yet, generally speaking, the implications of this are not understood. Just as the greatest proportion of the sphere of the mind is a dark, undiscovered continent – the unconscious – so the greatest proportion of human experience, our pre-literate, pre-cultural history, is also a vast sphere of the unknown. All the phenomena of consciousness are infused with indirect, unconscious influences, similarly all the experiences and ‘achievements’ of mankind during the current, brief phase of evolution (‘history’) are rooted in an obscure and distant past. This past is inaccessible to us even though it overshadows every aspect of our daily existence. Like the microwave background radiation – the barely detectable evidence of the earliest cosmic era that permeates the present universe – vestigial traces of mankind’s earliest and most traumatic experiences permeate the contemporary actuality of being. We have become so adjusted to our present mode of psychical life that these vestiges have assumed the paraxial character of radical alterity. Their marginal presence is so tenuous and indefinite that we have never grasped their significance – that they constitute the weakest of evidence for the vacancy of collective amnesia, a yawning gap in the human time-line. Not so much a loss of memory but, perhaps, vestiges of inexplicable experiences endured during an era before the evolution of memory itself.
Picture the ‘space’ occupied by our fragile self-awareness bordered on two sides by gulfs of impenetrable darkness – on the one hand by an abyss of the distant past, on the other hand by the shadowlands of the mind.