Crisis of the Object 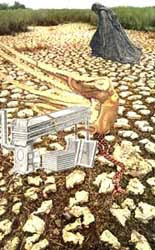 Max Ernst paraphrased the classic postulate of Lautreamont as ‘the fortuitous encounter – upon a non-suitable plane – of two mutually distant realities’ (Inspiration to Order). Here, a fruit-drying machine replaces the notorious sewing machine; an analogous object (octopus) replaces the umbrella and the ‘non-suitable’ plane of the dissecting table is replaced by a desolate landscape – in the background? Maldoror. Revised from Crisis of the Object, Letter of Introduction, 1972.

Illustration: Crisis of The Object III The Ducassian Encounter, 1972
Posted by AC at 10:35 No comments: 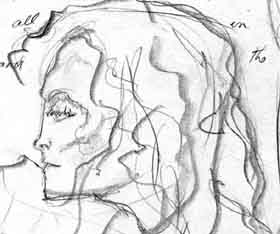 It might be the case that the idea of Convulsion as a guiding principle arose during a rambling discussion triggered by a short, passing reference to the topic in Patrick Waldberg’s book Surrealism (1965). There may be those who recall taking part in such a discussion in 1967 and who may even remember the very place in Chelmsford where we met – a coffee bar in Duke Street opposite the Civic Centre and Public Library – the last time I looked it was still there. There may also be some who, even today, might recall how, in a crowded, smoky hostelry next to the railway station, the more formal notion of a BCI (Bureau of Convulsive Inquiries, or was it Investigations?) was mooted. Some might claim that such a thing actually existed – on paper at least.
And yet I recall most vividly that it was, in fact, in Villiers Street, near Charing Cross, in a restaurant long since vanished (there was shadowy corner lined with fake books) that the suggestion of a Convulsionist Group was proposed for the very first time. I only wish I could remember the name of the place, but I expect it was a Golden Egg, as the interior decor was elaborate and colourful. We can all agree, I think, that Convulsionism emerged in 1967 for the simple reason that the poem ‘Birth of Convulsion’ dates from that year and no earlier testimonials survive: for a very few the Summer of Love was also the Summer of Convulsion.
It was late afternoon when, walking towards Villiers Street, through the Victoria Embankment Gardens, I came across that embodiment of the Convulsive Aesthetic, or one sharply defined facet of such an aesthetic: the Sullivan Memorial by W. Goscombe John. It was ‘the mourning girl’; an allegory of music grieving for a dead composer that, at that epiphanic moment, caused a veritable frisson of the imagination. This mild shock evoked in turn a quotation from Rider Haggard’s She, which I am very sure read as follows:

…with a convulsive movement that somehow gave the impression of a despairing energy, the woman rose to her feet and cast the dark cloak from her.


It was natural that I then recalled the famous passage from Against Nature where Huysmans decibes Salome's gesture in Gustave Moreau's watercolour The Apparation:

with a gesture of horror, Salome tries to thrust away the terrifying vision which holds her nailed to the spot, balanced on the tips of her toes, her eyes dilated, her right hand clawing convulsively at her throat..

An amalgam of Surrealism and Decadence with an element of the Mod-Pop axis mixed with pure fantasy, Convulsionism valued the imagination and automatism above everything – the ideal Convulsive 'moment' is always inadvertent. In their book Surrealism: Permanent Revelation (1970) Cardinal & Short said correctly:

Surrealism has established its own ‘aesthetics’ by defining beauty in terms of a purely affective response to phenomena.

That this ‘excitation of the nerves’ as Angela Carter defined the concept sometime later, was in fact an extension into the mid-twentieth century of the Decadent idea of the frisson nouveau or crise de nerfs was the clever but not necessarily original basis for the Convulsionist aesthetic. It was an aesthetic that flourished obscurely during the era known by some as 'that decade of convulsion', but, more specifically, The Swinging Sixties, and which, in the long term, I suspect influenced no one but myself. 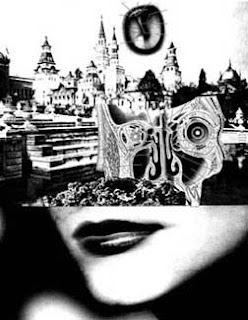 Collage, an ambiguous, complex medium of doubt, to quote Werner Spies, is an aesthetic of radical juxtaposition. In his personal treatise Beyond Painting (1947), Max Ernst, with reference to both Rimbaud, and the famous 'chance encounter' from Book 6 of Les Chants de Maldoror, defined collage as an 'alchemy of the image...' . However,the photomontage style of collage finds its origins in the work of the Berlin Dada Movement who in turn were inspired by the inadvertent imagery generated by early cinema special effects and the composite images of 'trick photography'. The term photomontage was invented by the Berlin 'monteurs', Raoul Hasmann and Hanna Hoch.
From the Freudian perspective it may be that collage exemplifies one of the two 'laws' governing the behaviour of unconscious processes or phenomena (such as dreams): the law of Condensation, or Compression, as it is also called. (The second 'law' is the law of Displacement.) Freud explained Condensation as the 'inclination to create new unities out of elements that we would certainly have kept separate in waking thought...' In 'The Enormous Face' section of his novel The Atrocity Exhibition (1970), J G Ballard refers to the 'planes of intersection' operative on 'a third level, the inner world of the psyche' where, as on other levels, such 'planes' interlock at oblique angles and where one finds 'fragments of personal myths fusing with the commercial cosmologies...'
Elsewhere is the same book Ballard asserts that images are born at the intersection of such planes, when 'some kind of valid reality begins to assert itself.'
Illustration: Psychic Citadel, 2002
Posted by AC at 16:27 2 comments: 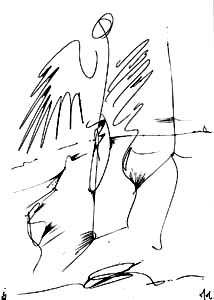 In automatic drawing graphical lines represent transient trace elements of transmission along neural pathways.
In his text The Automatic Message (1933), Andre Breton explained Surrealism's role in the 'determinaton of the precise constitution of the subliminal' but he also acknowledged that the conditions which validate an 'automatic' text or drawing are insufficiently known. Previously (1916) Austin Spare had defined automatism as an 'organic impulse' produced when the mind is in a 'state of oblivion'. By this means, he said, 'senasation may be visualised'. Just as Surrealists argue that Freudian theory helps to disentangle automatism 'from the sphere of spiritualist mystification' (Rosemont) it may be possible, as an extension of this approach, to suggest that automatist spontaneity is a manifestation of a little-recognised principle of self-activation, or self-determination, that is an essential property of reality. 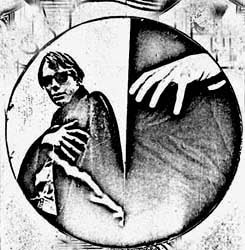 Could you tell me about the group you formed called The Neo-Surrealist Convulsionist Group?It is tempting to say we were just a group of alienated teenagers…! We formed the thing in 1967 and it only lasted until around 1971 or 1972. There were about five or six participants based in Chelmsford, Essex. Other places included Colchester, Ipswich and Witham… people used to meet in coffee bars after school – we were all sixth formers doing art or literature, mainly as a way of avoiding sport. The associations continued after everyone left school and tried to get jobs. Some poetry was written and experimental prose cut-up; atonal electronic music was composed and lots of paintings and collages produced. There were occasional expeditions or ‘pilgrimages’ to ‘displaced destinations’ such as the old Hungerford Bridge, the Victoria Embankment Gardens (for the Sullivan Memorial – 'very convulsive’), The Atlantis Bookshop, or the Dashwood Mausoleum and Hell Fire Caves at West Wycombe. But mainly there was a lot of loafing around, drinking coffee and snogging – or going to see Hammer Horror films and German Expressionist movies at the NFT. There was one exhibition at Hylands House – the exhibition was for all the school leavers but we managed to commandeer a room – as the Convulsionists were the general organisers of the show it was quite easy to get the space! We came up with the term ‘Convulsionism’ after the phrase ‘Beauty will be convulsive…’ (from Breton’s Amour Fou). I felt it implied the ‘visceral’ idea - my ideal work of art was to be a meaningless allegory generated by a kind of neurological spasm or frisson that could be transmitted to the viewer – well, if it gave me a frisson it might give you one as well. One old policy document (called To Be Continued) from my archive says: "CONVULSION IS CONCERNED WITH THE BEAUTY OF PURE IMAGINATION AND FANTASY AND IS VIOLENTLY OPPOSED TO CONTRAPTON IN ANY FORM" (To Be Continued: Convulsively Produced Notes On Convulsion, 1968). Earlier, I mentioned some key influences… I should add the Lost Generation to the list – the Francophile ‘Yellow Nineties’ Decadent poets and artists (Arthur Symons, Ernest Dowson et al) and, also, the ultra-Symbolist absurdism (as we saw it) of Laforgue and Alfred Jarry – we were quite keen on ‘Pataphysics as I recall… There was some empathy with English Pop Art, so we rather revelled in the Mass Media – Pop Music (The Doors, Brian Auger), Jazz (Indo Jazz Fusions, Duke Ellington, Charles Mingus), Science Fiction and ‘cult TV’. It was ironic that the real Surrealists had disbanded themselves in 1966 so we settled for being Neo-Surrealists!
(from the Neon Highway Interview with Jane Marsh, 2006)
Posted by AC at 13:20 No comments: