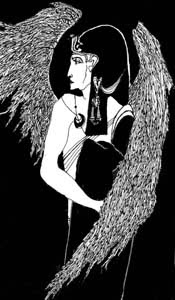 This is Nemesis Daughter of Nyx (Night) another early work from the CygnusX Archive. The drawing dates from 1966 and is clearly inspired by Aubrey Beardsley and the large exhibition of his work organised that year by Brian Reade (1913-1989) at the Victoria & Albert Museum. In his catalogue introduction Reade wrote of Beardsley: 'he belongs with the artists of night, not with the artists of day...' . Together with Kenneth Clark (whose article in the Sunday Times Supplement was called 'Out of the Black Lake'), Brian Reade was chiefly responsible for the Beardsley Boom of 1965-1969. This figure of Nemesis, according to one authority, a personifation of 'righteous anger', is a pastiche; it combines an incongruous ancient Egyptian influence with Beardsley's 'Japonesque' manner. To this day Beardsley remains the epitome of aesthetic dandyism; his work exemplifies not only the grotesque nature of Decadence - but also its style and elegance.

'If I am not grotesque, I am nothing' - Aubrey Beardsley

The Guardian of the Threshold 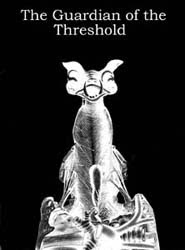 The ‘descent’ or ‘inverse pilgrimage’ (katabasis) is fraught with anxiety, obstacles and difficulties. This experience assumes the character of an ordeal – an ascesis, even – realised through ‘rites of passage’ comprising three known stages: separation – initiation – return. During this process the subject will encounter or confront uncanny horrors and paranoid connections. These terrors may include resurgent atavisms (the phylogenetic inheritance), pathological forces, every form of self-violation (mortificatio) and shadowy, chthonic ‘elementals’ – all characterised by a ubiquitous undertow of archaic nostalgia. The subject is exposed to all the underworld horrors of personal and collective unconscious contents (the 'inferno') and other phantasmagoria – such as tutelary ‘threshold guardians’ – derived, in the final analysis, from psychic formations known as ‘archetypes’. (from the Unique Zero Manifesto 2002-2007)
The picture features a computer manipulated detail from an early collage called 'The Guardian of the Threshold' (1969)
There can be lttle doubt that this Guardian - in part a reification of the artist's Shadow - is also one of those Hungry Ghosts, or, perhaps, a sub-species of that class of entity named The Dweller On The Threshold by Victorian novelist Bulwer-Lytton.
Posted by AC at 17:02 No comments:

Email ThisBlogThis!Share to TwitterShare to FacebookShare to Pinterest
Labels: 1969, Collages, Memorabilia, The Unconscious 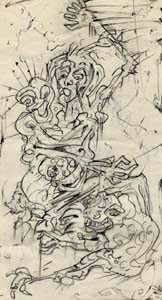 There are a few pencil sketches from 1966 in the archive. This rough drawing of The Temptation of St Anthony is probably the earliest. No doubt this frenetic, proto-convulsive figure is really a Damned Poet struggling with his or her inner demons - the first example of a continuing theme. 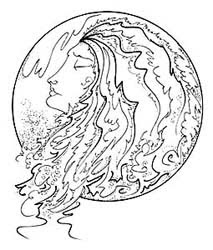 Here is a recent work. Perhaps it is an illustration for a very Decadent poem... Do you have a mystic sister? 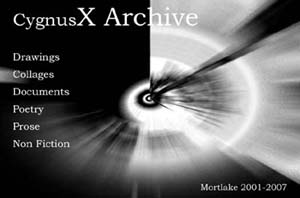 The CygnusX Archive is a growing digital collection. There are currently 1575 items in the archive of which over 1400 are original artworks. The earliest items in the archive date from 1966. These are grouped into a collection called Within The Glass (1966-1969), the first book of Collected Pencil Drawings, and a small group of miscellaneous uncollected works from 1967. There is also a small, growing collection of documents and diagrams of various kinds. Another section of the archive includes research information and biographical material relating to the Convulsionst Group, The Ultrasphere, publications and various small press interests that have devloped over the years.

'...art is an outlet toward regions which are not ruled by time and space' - Marcel Duchamp
Posted by AC at 12:03 No comments: 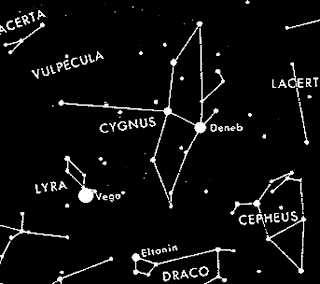 This is the constellation of Cygnus the swan distinguished by the brilliant star Deneb or Alpha Cygni: the energy source object CygX-1 was discovered here in 1965. In 1973, after the Uhuru Mission, CygX-1 was confirmed as the first Black Hole, sinister companion to the star HDE226868.

H P Lovecraft refers to Cygnus, with Deneb 'twinkling above the others' in his tale of alien incursion The Colour Out Of Space. In Roadside Picnic by the Strugatsys, the scientists Dr Valentine Pilman locates the origin of the Visitation Zones 'somewhere along the Earth-Deneb line'. The point of origin is known as The Pilman Radiant.


The cosmic Black Swan is also the The CygnusX Blogspot radiant, a continuing point of reference for current works and projects; for notes, observations and comment; for random incongruities and improbable juxtapositions. Occasional progress reports, featuring back-catalogue items from the CygnusX Archive will also appear from time to time...